After an important year for online sales, what is going on for Amazon, Zalando, Alibaba and other e-commerce giants? We have collected 5 macro-trends that will mark 2020.

Selling ​through marketplaces and not to marketplaces. Many platforms (which operated exclusively following a wholesale logic) are pushing brands to become sellers.

Zalando has already announced that, by 2023, the Partner Program will be the main sales model. Amazon follows the same trend.

Recent research shows that the number of third-party sellers operating through Amazon Europe has grown by 17%, reaching almost 3 million.

Even the percentage of units sold by sellers is growing fast: while in the first quarter of 2015 third party sellers produced 44% of transactions, in the first three months of 2019 they generated 54% of the total.

If it is true that “money follows eyeballs”, in 2020 marketplaces will build even more links with Influencer marketing.

According to American research, 49% of consumers “depend” on the influencers’ advice and 70% of teenagers place more trust in influencers than in celebrities.

86% of the US marketing offices have already allocated part of their budget to Influencer marketing (a “sector” expected to reach 20 billion dollars within 2020).

Marketplaces, in different ways, are focusing on Influencer marketing strategies: a trend that will continue to grow in 2020.

Similarly, Bezos’ “creature” is going to promote Amazon Influencers, the program that allows to create a personal page on Amazon to show followers the recommended items (and so earning straight from these sales).

Collaboration between content creators and e-commerce platforms will also result in the launch of limited-edition collections, such as The Drop by Amazon.

Farfetch regularly collaborates with both top and micro-influencers, i.e. with accounts with smaller follow-up (from 10 to 100,000 followers).

Tmall (owned by Alibaba) is working hard on Tmall Global Influencer Ecosystem: a network of international influencers with the task of “inspiring” Chinese consumers. At the moment, the ecosystem has 500 super-followed social accounts, but the plan is to reach at least 2000 of them. Will they succeed by 2020?

Technology changes, but the formula remains that of old telesales: a leading figure talks about a product on video, but does it live, on the web, within a platform owned by the marketplace.

While following the live broadcast, one click is enough to buy the product. The latest success story features Kim Kardashian (153 million followers on Instagram) and Viya Huang (a Chinese influencer). On Tmall, in a few minutes of live streaming, they sold 153 million bottles of KKW, the new perfume of the American star.

In the Asian world, Live Streaming is already changing the interaction between brands and consumers (by 2023 it is expected to generate over 71 billion dollars in sales). Most likely live streaming will also cover other markets.

In 2020, marketplaces will continue to invest in AI, for many purposes. Zalando is developing a system that suggests style tips by learning tastes and preferences of the user.

Amazon is working on an app enabling to “scan” objects in real life and finding them on the platform (and so ready to be purchased).

Alibaba is pushing hard on artificial intelligence too, in order to automate operations such as translations, upload of product images or customer service. Actually, AI allowed the Chinese group to better manage the Singles Day traffic peak, during which chatbots “dealt” with answering over 95% of users’ questions.

By 2021, 40% of consumers will use voice assistants rather than apps or websites. One in three buyers has already used them for shopping online (source: Capgemini).

eMarketer highlights how voice sales are changing in the US. If in 2017 American voice shoppers represented only 13% of the total, in 2020 over 34% of consumers will buy online through Google, Alexa or Siri. In 2021 this percentage is expected to grow to 38%. 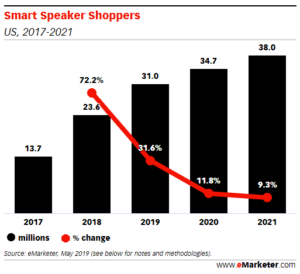 How are e-commerce giants getting ready?

Amazon’s voice assistant Alexa is already integrated with over 3,500 brands.

So, if users ask “what are the best offers for coffee machines?”, Alexa will include in the search all the brands that own the Alexa Choice badge (and therefore follow the strict standards imposed by the program).

Walmart partnered with Google instead. By saying “Hey Google, talk to Walmart”, users can immediately fill up the virtual shopping cart of the American chain.

Alibaba’s voice assistant, Tmall Genie, is embedded in BMW cars sold in China. It is even integrated with Starbucks, ready to record coffee orders from Chinese consumers.